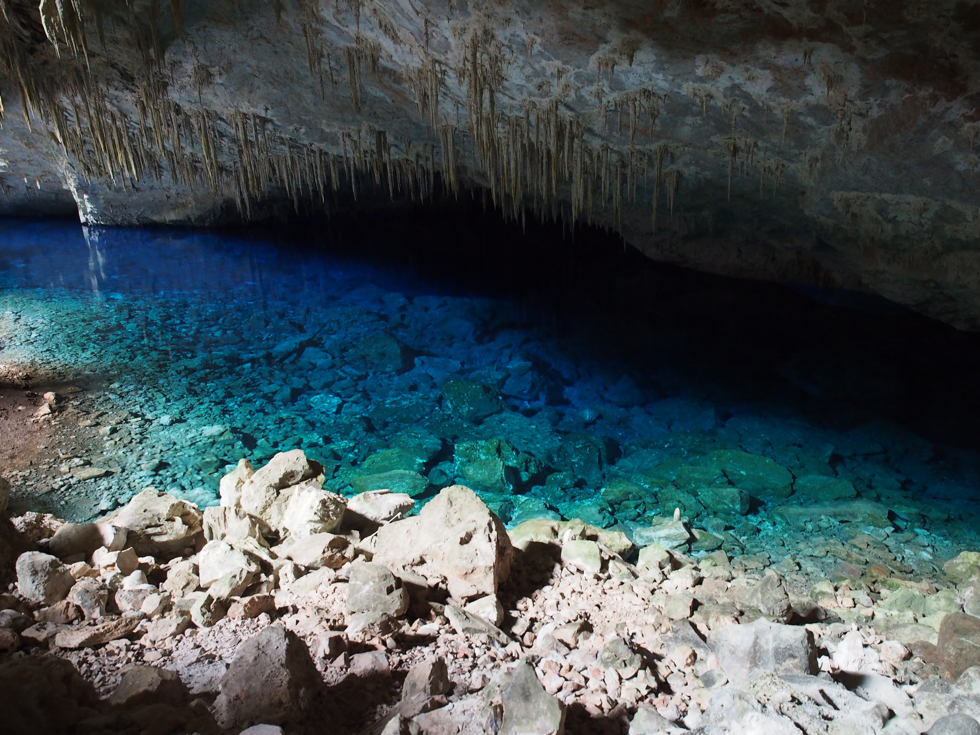 Everyone knows that Brazil has some landscapes that take one’s breath away. However, few are so enchanting as the Blue Lake Grotto (Gruta do Lago Azul), in the Brazilian town of Bonito, in the state of Mato Grosso do Sul.

This city, so famous for its rivers and waterfalls, hides away some caves that are practically unexplored. By way of example, the Blue Lake Grotto was only discovered in 1924 and only became a tourist destination in this last decade.

Standing some 20 km from the centre of Bonito, this grotto has been listed by the Brazilian Institute for Historical and Artistic Heritage (Iphan) in 1978. Apart from its gorgeous landscapes, the city is also famous for its ethnographic and archaeological contributions.

In 1992, a series of fossils of mammals that lived during the Pleistocene period (some 10,000 years ago) were discovered in this cavity. Among the species found here, there were remains of a sabre-toothed tiger and also of a giant sloth.

Apart from that, another thing that calls attention is the sheer beauty of the stalagmites and stalactites that make up the inside of this grotto. The different sizes and shapes of the speleothems in their curious contours give away the age of the cave. It is estimated that this cave is about 10 million years old.

The Blue Lake Grotto is one of the largest flooded cavities in the whole world. The exact depth of its waters is not known. The deepest that a diver has reached is 87 metres below the surface. It is believed that this grotto is fed by an underground river, as yet unknown.

Despite the name, the waters of the Blue Lake Grotto are crystalline. The blue colour is the result of the presence of minerals at the bottom of the lake and also of the incidence of the sun’s rays, and gets even more intense in December and January, especially before noon.

There is a need to travel along a trail of moderate difficulty, amidst lush and dense vegetation to reach the destination. The lake can be accessed by going down 294 steps, in a descent of some 100 metres, already inside the grotto. This excursion is not recommended for anyone with labyrinthitis or who is afraid of heights.

The whole trip takes about four hours. It is not possible to enter the grotto wearing sandals, slippers or other types of open shoes. Children under the age of five are not allowed either.

Several travel agencies offer trips out to the grotto, but demand is intense. We recommend making reservations at least two months in advance. The price of packages ranges from 90 to 150 Brazilian Reais, (USD 28 to 46) including transport and a tour guide.