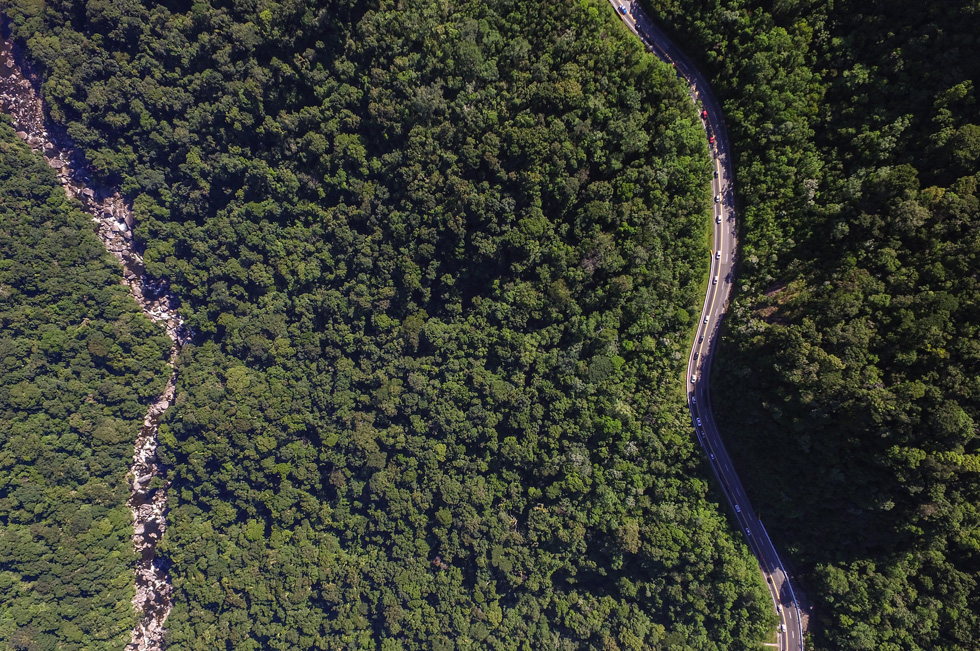 The motorways around Santos are famous for their curves; famous Brazilian singer Roberto Carlos sang about these curves in his well-known song As Curvas da Estrada de Santos (1969), which talks about the speed of his car when going down the SP-148 road, the Old Sea Route. However, very few people know that other roads in the state of São Paulo were also planned in the same decade, much to the delight of today’s people who love adventure sports.

One of these is the road from Rio to Cubatão (now the Rio-Santos motorway). Initially, the road was to pass through the coastal mountain range (Serra do Mar) rather than snaking its way parallel to the beaches of São Paulo’s North Coast, as it does today. However, this original construction project never materialised, and as a result, there are countless viaducts, tunnels and bridges which suddenly emerge from within the dense Atlantic Rainforest vegetation: a real paradise for adventure seekers.

At the largest of these bridges, known as the Petrobras Viaduct, abseiling and bungee jumping is among the most popular adventure pursuits. This viaduct, which is 300 metres long and 40 metres high, can be accessed easily; just drive for 30 minutes along a road built by national petrol company Petrobras, out to the district of Porto Novo, in Caraguatatuba.

Abseiling here is difficult. For those who are a bit less adventurous, the trip also offers some trails to waterfalls and viewpoints. Access to this location is free, and it is not necessary to hire any tour company. However, as the road is not well signposted, we recommend hiring a tour guide.

Jackslack Adventure (https://jackslack.com.br/) is one of the companies that provides trips out to the abandoned viaduct in the mountains from the district of Maresias (in the coastal city of São Sebastião). Tietê Turismo (http://www.tieteturismo.com.br/), at the town of Salesópoli, can provide a quote for a tour guide and necessary equipment for these trips.